Regrettably, despite over 200 local objections, and a strong statement from a local resident at the Planning meeting yesterday, this application was approved by North Somerset Council. The Committee was not sufficiently persuaded by our major concerns about increased traffic and pollution etc, and was swayed by the Planning Officer’s strong recommendation, and the opportunity for the Council to get, free of cost to them, “improvements” to the recycling centre. The request by our District Councillor, Bridget Petty, to refuse the application was lost by 12 votes to 10.

We do have an opportunity to influence the detail of the conditions to be applied to the consent before it is formally issued, and work will be done on this over the next few days.

SUMMARY Our bulletin of 1.3.19 (see below) gave details of the applications for business units in part of the old quarry, on higher ground above the Recycling Centre (RC). In brief these were:

Application 14/P/0304/F BRA and Backwell Parish Council (BPC) DID NOT object because this commercial development was included in our Neighbourhood Plan, giving potential for employment in the village.

Since then, the developers had protracted discussions with North Somerset Council (NSC) and produced a more ambitious application in 2016.

Application 16/P/0674/F BRA and BPC DID object on grounds of extra traffic for the larger footprint of the business units which was over 40% larger than the 2014 consented figure. There were some 200 objections from residents, mainly concerning the impact on the adjacent roads.

The developers have now modified these plans, but are still proposing the same larger area for the business units.

The BRA committee has considered the latest plans and has decided to continue to object, mainly on the traffic implications. Our objection letter can be found here Coles Quarry Objection Letter – 1st April 2019

TRAFFIC This is the aspect of the application that causes most concern. A school and the RC are situated in an area ill-suited to heavy traffic.

The traffic in Dark Lane / Church Town is mainly generated by:

In addition to the above, the developer’s transport consultant assesses that the business units proposed in 2014 would add a further 186 movements per day into the new site, and 186 movements out. The larger application in 2016 would create 265 extra movements each way on top of what we have now.

It should also be noted that additional housing planned for N Somerset, will create more RC traffic – much of which will come from the Nailsea direction, up Station Rd into Dark Lane. The airport has plans to continue its steady growth.

The current stance of NSC is:

NSC Highways are satisfied that the traffic generation associated with the proposed development will not result in significant increases in traffic volumes on the local highway network in the vicinity of the site when compared with the permitted lawful use of the site and will not result in detriment to the local highway operating conditions in this location.

They also state that:

Additional trip generation will be offset by the proposals to create a new access road within the neighbouring RC.

BRA does not agree and has asked NSC to provide evidence for these statements, which local residents in particular question.

BRA considers that the higher level of traffic associated with the 2016 application will be unacceptable, in terms of increased risks, particularly pedestrians and cyclists, as well as inconvenience to residents. This is our reason for objecting.

CONDITIONS Even if an application is being opposed, it is helpful to request that conditions for acceptance are given. A 20mph limit in Dark Lane and Church Lane is important for local residents, along with restrictions on hours of working, noise, external lighting etc.

A revised application has been submitted for Coles Quarry – this bulletin is devoted to this topic.

We were led to believe that the closing date for comments was April 14th, but have since discovered that it is March 12th,  so this is urgent. We have stated that this is unreasonable, given that some documents have only just been posted on the website. The purpose of this email is to explain the current application and inform you of the need to make your views known.

HISTORY Coles Quarry produced stone from the 1800’s until the 1970’s, with lorry movements up and down Dark Lane. As well as being a busy working quarry, there was an associated dry pack facility. When the quarry activity ceased, the dry pack work continued for a while. Later the recycling centre moved from the bottom of Cheston Combe to its current site below the quarry. North Somerset Council (NSC) decided that the owners of the quarry be allowed to redevelop the site, using the former dry pack footprint. The refurbishment of the old weighbridge office is almost complete, and will be used for offices. Much of the area is in the Green Belt, but as a derelict industrial site it was deemed to be suitable for development on the old footprint.

Application 14/P/0304/F  BRA and Backwell Parish Council (BPC) DID NOT object because this industrial development was included in our Neighbourhood Plan, giving potential for employment in the village.

This was approved by NSC, with conditions, in Feb 2015. The area taken up by the industrial units was 2679 sq m.

Since then, the developers have been in protracted discussions with NSC and produced a more ambitious application in 2016.

Application 16/P/0674/F  BRA and BPC DID object on grounds of extra traffic for the larger footprint of the industrial units which is over 40% above the 2014 consented figure. This application was received by NSC in Feb 2016 and is still to be determined. There were some 200 objections from residents, mainly concerning the impact on the adjacent roads.

WHERE WE ARE NOW

The developers have submitted a revision to the 2016 application 16/P/0674/F, after consultations with NSC. The main points to note are:

The industrial units are shown below: 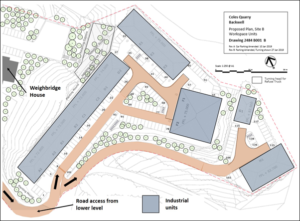 The proposed changes to the HWRC are given below: 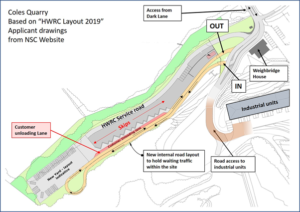 Dark Lane, Church Lane and Church Town have never been suitable for heavy traffic, even though they provided the access to a large working quarry and cement plant up until the 1980’s. In the 1951 census the population of Backwell was 2,003, and it grew to 4,589 by 2011, with further growth since. Despite the population more than doubling over this period, these roads are virtually unchanged and are narrow, with inadequate or non-existent pavements. Local residents would prefer no extra traffic from any industrial units to add to existing traffic including a busy Junior School and the Recycling Centre.

POINTS IN FAVOUR OF THE APPLICATION

POINTS AGAINST THE APPLICATION

BRA is disappointed to note that a report from NSC Highways and Transport dated, 26th Feb 2019, posted on the website states:

Highways are satisfied that the traffic generation associated with the proposed development will not result in significant increases in traffic volumes on the local highway network in the vicinity of the site when compared with the permitted lawful use of the site and will not result in detriment to the local highway operating conditions in this location.

We believe this not the view of local residents.

At the BRA AGM on Feb11th, a straw poll of those members attending showed a rough balance between supporters and opponents of the application. We are aware however that some of those objecting to the application are passionately opposed to any increase in traffic.

CONDITIONS Even if the present application is approved, there is scope for NSC to apply conditions to the development. One key aspect is that of restrictions to the traffic eg a 20mph zone in Dark Lane, or Church Lane and Church Town. We are aware of strong feelings about 20mph zones, and their enforcement and of the pros and cons of speed bumps etc. BRA believes that the vast majority of people living near the Coles Quarry site would favour a 20mph speed limit.

The BRA works to safeguard and promote the collective interests of the residents of the village of Backwell, North Somerset in matters concerning social, economic and community life and the character of the village.